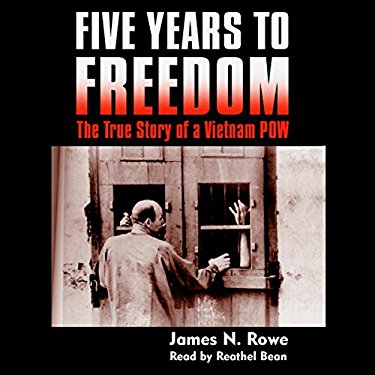 In Five Years to Freedom, Green Beret Lieutenant James N. Rowe takes the reader through a freak show masquerading under the name Prisoner of War camp in South Vietnam. Imprisoned while working as an advisor to South Vietnamese government forces in 1963, Rowe recounts his capture, five year imprisonment, and ultimate release in this gripping tale marred by mediocre prose. The story is unique, well-laid out, and worth reading. However, the writing is written in a just-the-facts style that is unworthy of the unique experiences Rowe relates.

The book begins with his capture. It was October 1963 and Rowe was helping to provide artillery support for a South Vietnamese patrol deep in Vietcong territory. Suddenly, Rowe’s patrol is caught in an ambush and a series of running battles with Vietcong units. At each successive battle, Rowe’s unit loses more and more men. The Vietcong rake his position with mortar fire. Rowe describes it like this:

The first rounds exploded in the paddy about two hundred meters away, their detonations blending with the now almost continuous rounds of more rounds being fired. Oh shit, I thought, almost in time with the explosions that were walking closer as the VC gunners adjusted their aim. My stomach tightened into a small compact knot as if trying to draw my whole being into its protection. Fragments whistled and cut the air around us. “Keep ‘em moving, Tinh!” I called to him as a near explosion showered him with water.

The men failed to move fast enough and formed into a ragged defense perimeter, low on ammo. Rowe and his compatriots fought to the last round and then attempted to escape by breaking into small groups. Rowe was one of the unlucky ones. He didn’t make it.

So began his odyssey through the nightmare P.O.W. camps of South Vietnam. Invariably run by hardcore communist cadres, the camps were a relentless ideological and physiological attack on the American soldiers. Food was provided at subsistence levels and used to reinforce ideological lessons. If they failed to learn the proper views about the Vietnamese Revolution, food was withheld. Rowe and his countrymen were shackled at night. Disease constantly plagued them.

Throughout the 460 pages of text, there are many heartrending stories of neglect, torture, and death. Consider this story of Tim “The Bear” Barker – a U.S. Army Captain. Before his imprisonment, he was 225 pounds and over six feet tall. After a year of captivity he had shrunk to 135 pounds and his body was wrecked by constant enforced squatting that left him standing barely five feet 8 inches tall. Rowe shuddered in involuntarily revulsion by Tim’s appearance – his body was covered in fungus infections and his face resembled the SS Death’s Head, smiling for no reason in his delirious state.

His black pajamas were filthy and worn almost through. The infected skin and strong stench of dried pus from the open ulcerations made us gag. I fought the urge to vomit as the water and soap loosened dark yellowish cores from the eruptions covering his back, chest and legs, allowing fresh purulent discharge. He was covered with fungus, but it was complicated by obvious excessive scratching and lack of washing. The infection had gone deep and the ulcerations were large enough that I could have inserted the tip of my little finger into any of them without touching the edges. He was starving and had rapidly lost hope for ever getting out.

Tim died 28 days after he arrived in Rowe’s camp. The fact that Rowe lived through the ordeal was his age – in his early thirties, he was much younger than many of the other soldiers imprisoned with him. Many died.

Why is this story important? Because Rowe endured the unendurable, he gives us a guide for enduring our hardships. Rowe’s secret? He writes:

I was stripped of all material assets, leaving only the intangibles which form the core of our existence: faith, ethics, morals, beliefs. Were I to survive with my spirit intact, I could only turn to faith in the Power I believed to be so far greater than that which imprisoned me. For the first time in my life the words of the bible were a source of strength and consolation.

Another reason this book matters is because it serves as an important counterpoint to the anti-war movement. When Rowe, in disbelief, hears U.S. senators, college students, and anti-war demonstrators denounce him in his cadre-led political indoctrination classes, the effect on him as P.O.W. is devastating. Rowe remembers:

I was fighting back the bile that rose in my throat as I looked at the pictures and heard the voices of Americans giving support to this conglomeration of Marxists, revolutionaries, soul-crushing atheists; this system, this ideology that pledged itself to destroy the very liberties those people were exercising. Dear God, I was thankful Tim and Dave and Ben weren’t here to see this. At least they died believing the American people supported the cause for which we were going through this hell.

Rowe and his compatriots suffered for the American people. Their story isn’t told in schools. It’s barely mentioned in a few documentaries, watched by a few thousand people. We remember at Battlecast – and not just the American P.O.W.s but Prisoners of War from around the world. May they never be forgotten.

One thought on “Five Years in Hell”