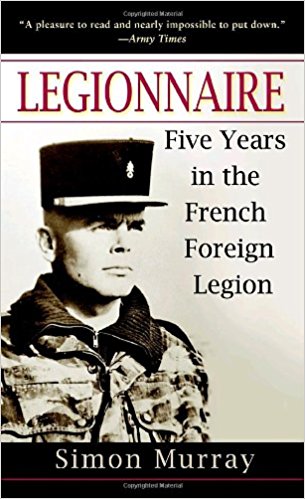 There are books that are not quite great but are still touching – books like plain women with beautiful souls – and Legionnaire by Simon Murray is one of them. Murray, a privileged, nineteen-year old Englishman, possessed with an ill-defined malaise, turned his back on England in 1960 and dives head-first into the brutal world of the Foreign Legion and a savage guerilla war in Angola. He was looking for adventure. What he found was camaraderie, blood, and incredible highs tempered with incredible lows – like so much in life.

The book is written in a straightforward narrative style, starting with Simon’s enlistment and culminating in his ride from the Legion headquarters on a train to Paris and a beautiful girl named Jennifer whom he has written to for the duration of his five year tour – a great way to end any book. His description of the training he received is like so many other military memoirs, though unique for two reasons: it takes place in an incomprehensible language in the company of polyglot inductees, and it is exceedingly brutal. Simon describes a number of sadist officers who delight in torturing recruits. One method is la pelote. Murray describes it:

La pelote is when the prisoner is equipped with a sack of stones on his back with wire shoulder straps, and a steel helmet on his head without the interior, and then runs. A sergeant stands over him with a whistle and a whip. At the command of the whistle, the prisoner must forward roll, crawl on his stomach or march with knees bent. Then there is a slow in the pace, and then the whip’s end comes into play.  There was not a man among us who for all his feelings of revulsion and hatred against this meaningless barbarism was not also secretly afraid at what he saw, afraid at the brutality; that it could be administered by a sadist, with no control and no appeal to any authority.

And brutal it was. Algeria was a land of ghost towns – a countryside pummeled by war.

Life completely has gone out of the mountains where once there were small homesteads, goats, and quite people. The piles of rubble mark the path of the French in 1957, when they adopted a policy of scorched earth, which was the systematic destruction throughout Algeria of all the outlying farms that could in any way be used as point of refuge by the Arabs.

There is brutality even in furnishings: one legionnaire collects the ears of his kills in a jar by his bed, another physically destroys a bordello while simultaneously another drinks an entire bottle of vodka and then eats the bottle – his mouth a testament to gore. Simon describes decapitating men he has killed so central intelligence can check their identities.

Dornach got to work on the heads with a small, sharp penknife, cutting across the necks. I was numb inside and felt nothing as I watched Dornach hack away, with bloodied hands, like something out of Macbeth … There then followed an incident that I will recall to my dying day. Some Spaniard in the 2d Section had prepared a small cauldron of soup. They called over a German and invited him to fill his tin mug. Just as he was about to put the cupful of soup to his lips, one of the Spaniards, with a mighty guffaw, reached his hand into the cauldron and pulled out by the hair one of the Arab heads, which he had retrieved from the bushes.

The macabre is rampant in Murray’s book and is a fitting read for October – there is no chivalry in these pages. The only thing more common than brutal violence in the book is consumption of alcohol which often leads, predictably, to more brutal violence.

A good book will draw you into the characters, make you empathize with them, and so it is with Legionnaire. When Simon enters the bullet-train to Paris and the waiting arms of a beautiful woman, I feel like I am almost there with him – looking through the fogged coach windows, anticipating the lip-glossed lips of a woman he hasn’t seen in seven months. I am too old for that now but I felt the old familiar pain when I finished Legionnaire. And you will too.

Four bullets out of five.