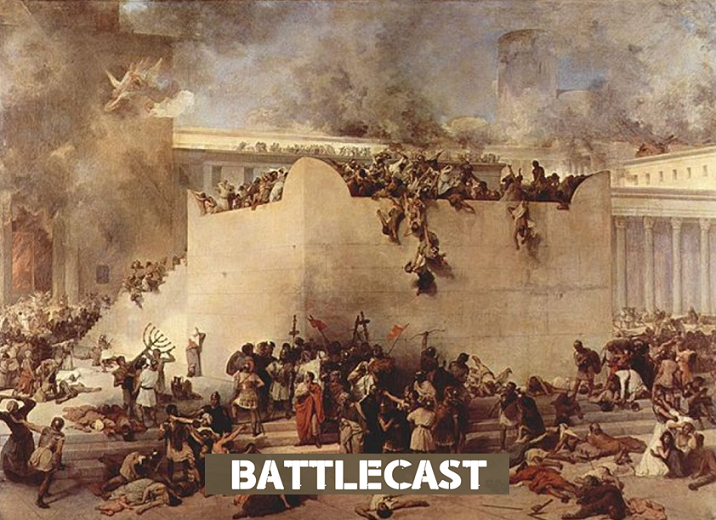 It’s a war that goes by many names: The First Jewish-Roman War, The Great Revolt, The Jewish War; but whatever name you prefer, The Great Revolt was a war that influences untold millions today. The Revolt directly altered the entire calendar of the Western World – moving the sacred day of rest (and your primary day off from work) from Saturday to Sunday. It influences millions of Christians today who either see it as a direct fulfillment of a key prophecy of Jesus Christ or argue against the position that the war is a fulfillment of divine revelation. Regardless of their positions, Christian scholars pour over this war the way bankers calculate changing interest rates: zealous devotion. Moreover, this war has directly impacted the English language – forcing diligent students in Korea and China to look up the etymology of words like zealous and zealot. Here is a war that is more than battles and blood, a horrible tale of whole cities reduced to sex slavery and death; this is a war that fundamentally altered Judaism – changing it from a religion of the temple to a religion of the synagogue.

And how many of you know anything about it? What a fine education we give our children in the Western World. We speak a language whose foundations are lost. We take days off and don’t know why. Here is the story of prophecy, pain, and forced prostitution: The Great Revolt.

It’s all here and it’s all for free on Battlecast – the world’s foremost podcast on war and its socio-political impact.

The Jewish War by Josephus

The Antiquities of the Jews by Josephus

Jews in the Greco-Roman World by Martin Goodman

The Histories by Tacitus

Rome and Jerusalem by Martin Goodman

Between Rome and Jerusalem: 300 years of Roman-Judean Relations by Martin Sicker

Jewish Reactions to the Destruction of Jerusalem in 70 A.D. by Kenneth Jones

Jerusalem’s traitor: Josephus, Masada, and the fall of Judea by Desmond Seward

City of Ruins by Derek Daschke

A History of the Jews by Paul Johnson

A History of the Jewish People by Haim Hillel Ben-Sasson et al.

One thought on “The Great Revolt: The First Jewish-Roman War /// 48”